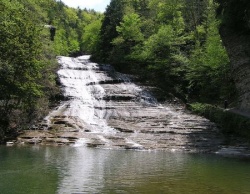 The City of Ithaca, in the heart of the Finger Lakes wine-producing and resort area of central New York State, is a small but thriving cosmopolitan city surrounded by an unspoiled, easily accessible environment of startling natural beauty. The City's motto "Ithaca is Gorges" derives from several deeply cut gorges, with spectacular waterfalls carved through the rolling terrain.

The area is favored almost equally for its cultural and educational richness, recreational resources and scenic rural charm. Ithaca sits on the southernmost shore of Cayuga Lake, the longest of the Finger Lakes at 38 miles. The City rises to the hillside majesty of Cornell University on the east and Ithaca College on the south.

Ithaca has a resident population of about 30,000, and the surrounding county about 100,000, inclusive of students. The student populations include Cornell University (20,000), Ithaca College (6,500) and Tompkins-Cortland Community College (3,000).

Ithaca is ranked #8 in Kiplinger's Personal Finance list (June 2006) of "50 Smart Places to Live." Expansion Management's annual 2006 Knowledge Worker Quotient, which ranks a metro area's ability to provide the depth of talent that technology companies require, ranks Ithaca #1 overall, #1 for college-educated workers and #5 for scientists and engineers. In 2004, Ithaca was ranked #1 in the "Emerging Cities" category of Cities Ranked and Rated, a book by Peter Sander and Bert Sperling.

Cultural richness is yet another reason the greater Ithaca area is such a special place in which to live. Tompkins County is one of the most artistically rich counties in New York State. Ithaca boasts its own chamber orchestra, ballet company, opera company and several theater companies that create productions of exceptionally high quality. During the academic year, Ithaca College and Cornell University offer a season of concerts, drama, and dance productions, bringing to the area musicians and artists of world renown.

Not surprisingly, considering that Ithaca is such a leading educational and cultural center, the Community sets high standards for its public schools. The Ithaca City School District includes seven elementary schools, two middle schools, and one senior high school. There is also a nontraditional alternative school.

With close ties to Cornell University and Ithaca College, Ithaca's school staff, teachers and students are immersed in a broad, sophisticated and exciting world. As a percentage of the graduating class, Ithaca High School's semifinalists in the National Merit Scholarship Competition continue to exceed the U. S. average. Of Ithaca High School's graduates, typically 25-30% complete honors and Advanced Placement courses, over 85% pursue post-secondary education and over 14% enter the nation's most highly-selective colleges.

The Community's pride in, and commitment to, the creative and performing arts is further reflected in the quality of related educational opportunities within the school system. Ithaca High School music groups participate regularly in state and national music competitions, frequently earning first-place awards. The middle schools also provide strong performing arts opportunities, their combined orchestra having been honored by the Creative Arts Workshop Showcase. The National Endowment for the Arts has recognized the School District with an award for original operas written, produced and performed by students from the middle schools.